Commonly known as the Neem tree, Azadirachta indica is native to India and the subcontinent but has also been introduced to other parts of the world, especially subtropical locations. The tree has an important use for humans: the seeds produce a natural pesticide that repels insects. This is a natural insecticide that is popular with organic gardeners who want to avoid environmentally destructive chemicals.

There are many other uses as well: Neem oil is extracted from the seeds and fruits and is commonly used in India in soaps, shampoo and other skin care products.

The natural insecticide properties of the leaves are strong enough that in the tree’s native India, people often use dried Neem leaves to stop insect infestations in food and clothes storage areas. The leaves are also sometimes burn after being dried and used as a mosquito repellent. In India as well as southeast Asia, the young tree leaves as well as the flowers are eaten in various dishes. 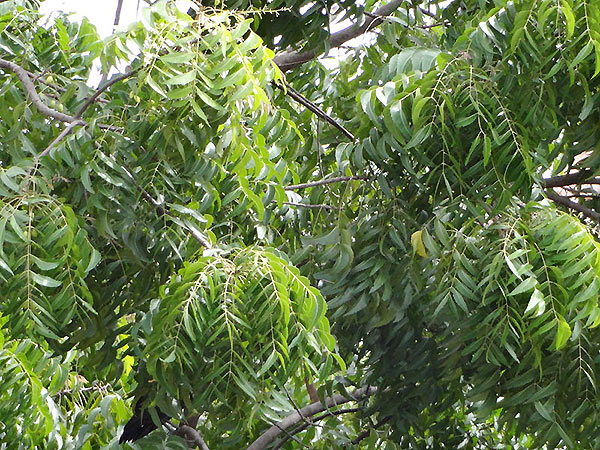 But its the potential medicinal properties that often gets people interested in Neem. It’s been long used in ancient Ayurvedic medicine for various purposes: antifungal, antibacterial, antiviral, for skin conditions like acne and eczema, and even as a sedative. Neem oil has long been used in traditional medicine to help with liver function, detoxification, blood sugar level maintenance, and even for hair health.

When it comes to humans, there just isn’t enough research out there to say one way or another whether Neem is scientifically proven to be beneficial. As far as safety goes with human use of Neem products, it’s believed that there are no short term negative effects, but longer term use could put people at risk of kidney or liver harm.

It’s important to note that neem oil is considered toxic to children, and is believed to heighten risk of infertility and miscarriage which is why it’s seriously advised that pregnant women not use neem oil. Clearly this is a very powerful substance, and this must be kept in mind when considering its safety and suitability for parrots.

Wild birds throughout the native range of the Neem tree certainly feed on the fruit of the tree without ill effect; this is one of the main ways that the seeds are dispersed. It’s the fleshy pulp around the seed that is relished by wild birds, while the seed then later passes out in whole form – this is often an important part of the germination process in the plant world.

It is difficult, or impossible however, to compare the nuisances of the diet of wild birds who feed on Neem tree fruits as a small part of their diet, to the risks that the seeds can present to parrots in captivity, and certainly not to highly concentrated oils and extracts.

Is there any need to use Neem oil or other neem products, or provide access to Neem trees, to captive parrots, considering the potential risks?

The obvious answer is no – with so many other safe trees, foods and properly formulated supplements for parrots out there, Neem derived products and the Neem plant itself (especially the seeds) present too many risks to birds.

Although Neem leaves and seeds are unlikely to cause toxicity issues in very small quantities, if a bird has access to many seeds and continually ingests them, risks present themselves – a risk that parrot owners don’t need to be taking.

Neem oil is made to be used externally, not internally. It is a highly concentrated form of extract. Again, there is just no hard data out there on whether or not Neem oil is safe to use on birds, or even of any benefit. In in doubt, most parrot owners will simply choose not to take the risk.